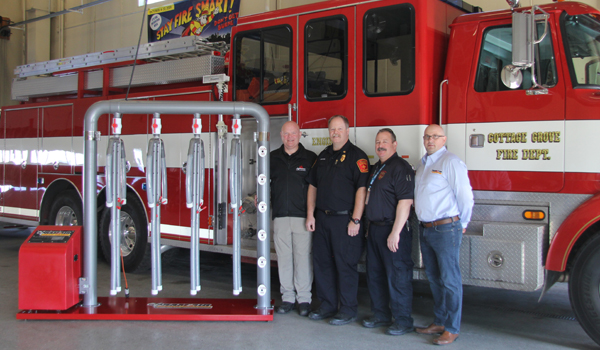 Sponsored by Ram Air Gear Dryer, the 2017 Hometown Heroes Gear Dryer Giveaway marks the second year Ram Air has conducted this sweepstakes. Established as a salute to the firefighters that serve our country, the Hometown Heroes Gear Dryer Giveaway was open to employees, volunteers or retirees of any fire department within the United States of Canada. The contest closed on December 31, 2017.

“As a firefighter-owned company, we have a sincere appreciation of preserving the safety of firefighters and those they serve. Our gear dryers help reduce the risks associated with dirty, wet gear and, as such, we are thrilled to give the Cottage Grove Fire Department the tools they need to ensure the safety of their firefighters,” said Lance Dornn, president of Ram Air.

Chosen from more than 2200 entries, Redenius entered the sweepstakes online after hearing about it at an industry trade show.

“We are very excited to be receiving such a fine gear drying unit and cannot wait to get it into service,” said Redenius, deputy director of public safety – fire chief, Cottage Grove Fire Department. “We currently wash gear after any interior fire response but due to budgeting issues have not had a gear dryer in the past.”